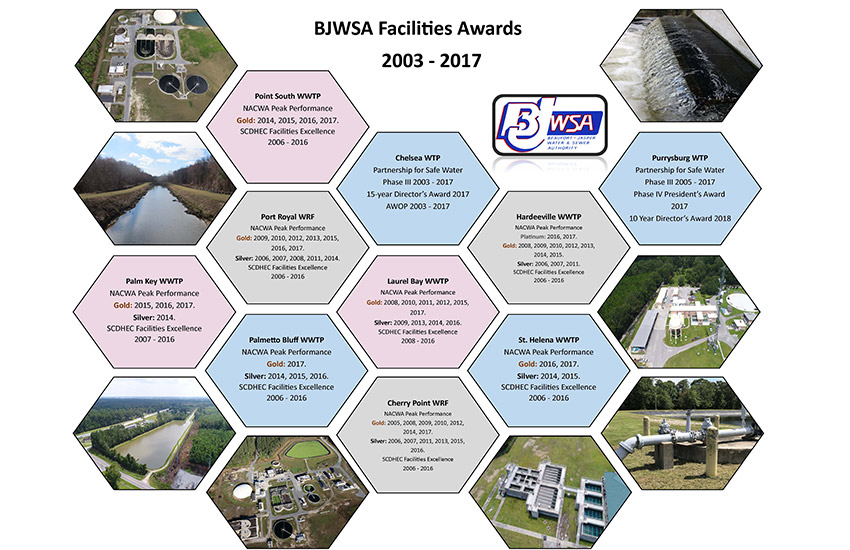 The Association of Metropolitan Water Agencies (AMWA)  honored Beaufort-Jasper Water and Sewer Authority (BJWSA) with its “Sustainability Award” October 20 at its 2014 Executive Management Conference in Newport Beach, CA. The award recognizes water utilities that have made a commitment to management that achieves a balance of innovative and successful efforts in areas of economic, social and environmental endeavors. It represents AMWA’s highest honor. Nationwide, only nine utilities received the award.

as one of nine public utilities recognized nationwide for efficiency, cost of operations, and quality of service.

for optimizing water treatment beyond what is required by regulations, specifically particle removal and disinfection.

Utility of the Future Today – 2017  This recognition is based on criteria in the activity areas of Community Partnership & Engagement, Water Reuse and Watershed Stewardship. The recognition program is sponsored by the National Association of Clean Water Agencies (NACWA), the Water Environment Federation (WEF), the Water Environment & Reuse Foundation (WE&RF) and WateReuse — with input from the U.S. Environmental Protection Agency (EPA).

National Environment Achievement Award was given to BJWSA for our series of innovative, easy to understand videos that describe our treatment processes and our Great Swamp restoration project.

15 Year Director’s Award for Chelsea in 2017 for commitment to producing superior water quality.

10 Year Director’s Award for Purrysburg in 2018 for commitment to producing superior water quality.

for having the most distinguished safety program among utilities throughout the nation.

Herman F. Wiedeman Award in March of 2014 to Joe Devito, Field Operations Director. The award is presented annually to a member who has been actively engaged in the water supply profession and has contributed substantially toward achievement and science of the water supply industry.

Golden Manhole Award in March of 2012 awarded to Joe Devito, Field Operations Director. The Golden Manhole Award is an award to recognize individuals who are significant contributors to the advancement of the Design, Education, Training, Certification, Construction, Operations, Maintenance and Management of Wastewater Collection Systems.

for the excellence of our safety program

for outstanding efforts in the promotion of industrial safety and health. As of June 30, 2008, BJWSA had no preventable lost time accidents in 1,989 calendar days, with 1,307,469 safe work hours.