Overwatering lawns may contribute to landscape diseases and bigger problems 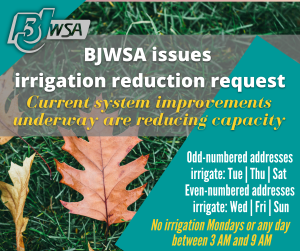 a water use reduction request for their 65,000 customers in Beaufort and Jasper counties. Customers are asked to postpone landscape irrigation. The availability of treated water is limited in the system because of improvements underway at one of the Authority’s two water treatment plants. The Authority is replacing essential treatment equipment at the Chelsea water treatment plant which is expected to take approximately three months.

“We planned this important restoration project for the end of the year because irrigation normally decreases in the fall and we want to be complete for spring usage peaks. However, we’re currently observing higher than normal irrigation demands, likely because of the lack of rain over the past several weeks,” said Chief of Plant Operations Brian Chemsak. “We realize that some people may try to extend the season for their green lawns but it’s time to let most southern grasses go dormant until spring. It’s good for your lawn and for your water system.”

According to Clemson University’s College of Agriculture, Forestry and Life Sciences, warm-season grasses only need about an inch of water every three weeks while dormant during the late fall and winter in South Carolina. Warm season grasses dominate landscapes in the southern part of the state and include Bahia, Bermuda, Centipede, St. Augustine and zoysia varieties.

If customers in Beaufort and Jasper counties fail to reduce morning irrigation consumption, the two-county system may begin to lose pressure and that can lead to bigger problems. As pressure drops, the first symptom would be discoloration problems and reduced water pressure at customer taps. A major loss of pressure could necessitate boil water advisories, cause service interruptions and even threaten firefighter’s access to adequate flows.

Customers who must use their irrigation systems are asked to follow BJWSA’s Irrigation Management Plan. The plan involves adjusting irrigation timers to water only three days per week, on a rotating schedule. Customers with odd-numbered addresses are asked to irrigate on Tuesdays, Thursdays and Saturdays. Those with even-numbered addresses are asked to irrigate on Wednesdays, Fridays and Sundays. No irrigation should occur on Mondays or any day between the hours of 3 AM and 9 AM when water usage traditionally is at its highest.

Looking to the future, in addition to the current equipment restoration, BJWSA plans to increase water production and system storage capacity. However, a $52 million project to double capacity at the Purrysburg Water Treatment Plant in Jasper County will not be complete until sometime in 2025.